The Singing House / The Music Box

The Singing House demo
A short demonstration of latest Quintronic’s musical invention called THE SINGING HOUSE. This is an analog “drone synth” which is completely modulated by the weather. (via Dangerous Minds) 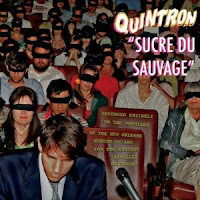 Robert Rolston aka Quintron is a nightclub organist and inventor, based New Orleans, Louisiana, regularly accompanied by his wife Miss Pussycat, who sings backup and plays maracas at the Spellcaster Lodge in New Orleans. He plays music on a custom made Hammond / Rhodes combo synthesizer / organ, and his own patented invention THE DRUM BUDDY. Quintron’s latest album “Sucre Du Sauvage” (2011) is available via Goner Records.

The Brooklyn-based artist Swoon is bringing a landmark permanent sculpture to the Bywater neighborhood of New Orleans. This “house” will also function as a musical instrument. A growing group of local and national sound artists are creating interactive instruments that will be built into its walls and floorboards allowing visitors to bring the house to life through their touch. This fall they will debut prototypes in a temporary installation called THE MUSIC BOX, A Shantytown Sound Laboratory.